Late on Sunday, it was brought to everyone’s attention that Chelsea player John Terry had announced his retirement from international football. Terry faces a FA disciplinary hearing this week, to do with the incident with fellow international Anton Ferdinand, which happened last season. John Terry had played for England on 79 occasions, and was captain for a period of time too.

He was always a proud and passionate player for England, and is upset to call his time up on international duty.

England manager Roy Hodgson is said to be disappointed with John Terry, but also understands his decision too. John Terry has played more games for England than another centre back in recent tournaments and qualifying stages, and arguably was always first choice for his national team, as well as Chelsea, where he is the club captain. John Terry had fantastic Euros, in Poland and Ukraine, and was one of the few players for England who was terrific in all of the games. John Terry, who is 31, has been a controversial figure in football. 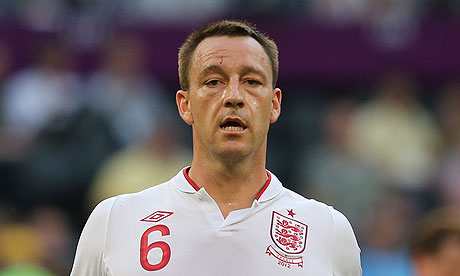 He has fallen out with both Ferdinand brothers, Anton and Rio, as he was accused of racially abusing the former when Chelsea played QPR last season. A few years back, Wayne Bridge refused to play for England, after John Terry had an affair with his wife. John Terry has also been sent off for a number of times in the Premier League and Champions League. Terry receives a lot of stick from most fans when playing in the Premier League, but when he turned up for England, always received positive feedback from fans, and cemented his spot in the team.

Is this good or bad for England though? England have many centre backs to choose from, and this could even bring a case to bring Rio Ferdinand back in to the national team set up. Rio, 34, still plays at the highest level for Manchester United, but was over looked by Roy Hodgson, but many believe he wasn’t picked because Roy preferred to play John Terry instead. Other centre backs for England include title winning Joleon Lescott, young defenders Cahill, Smalling and Jones and Jagielka has been in impressive form for Everton too. There is a lot to choose from, and some centre backs are young, so Hodgson has a lot to choose from, and can build up a team for the future. John Terry was a great performer in the Euros, and there is no doubt about his ability and commitment to the team.

The England team may miss his presence but it’s a problem Roy Hodgson has to endure.  John Terry had plenty of commitment and courage, but his controversy surrounding his personal life and football career was the main reason for him to call time on his international career prematurely. The retirement has been given mixed feelings from the fans, as John had had as many haters as he did admirers.